From Scratch
While I was working in the food industry, I had a spirited debate with the VP of Sales over what constituted a meal "from scratch". I (like most consumers) believe that cooking dry pasta and topping it with sauce equals "scratch cooking". He 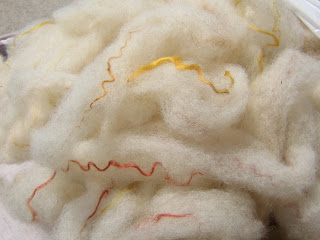 (with a mother straight from Sicily) thought you had to grow the tomatoes and make the pasta for it to count as such. I suppose knitting follows the same sort of rationale. If we buy the prefab yarn and pattern and knit a pattern stitch for stitch designed by another - are we really creating or just facilitating?

I'm pondering this aspect of the creative process a lot these days. After making my first knitted 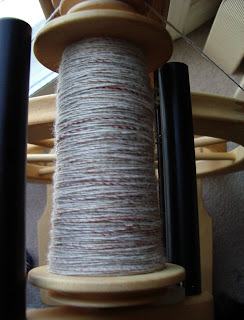 item using my own hand spun last fall, I decided to enter the Five Counties Fair again this year with another item knitted with my own hand spun. I purchased some beautiful Shetland roving from Hopeful Shetlands in a natural ecru shade gilded with shots of silk in copper and gold shades. It's our Spinning Guild's 60th anniversary so the theme for the fair is "anniversaries". I've drawn the 13th anniversary and the traditional gift is lace. The 60th anniversary is know as the diamond anniversary so I'll be combining these two themes. Hence, I've chosen to make the Diamond Fantasy shawl. 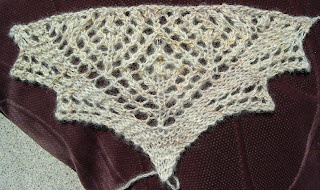 I'm making a two ply lace weight yarn which means lots of spinning. For the first time, I spun to a desired grist for the single and then made two small bobbins of the single using empty toilet paper rolls. I plied the yarn into a two ply and then 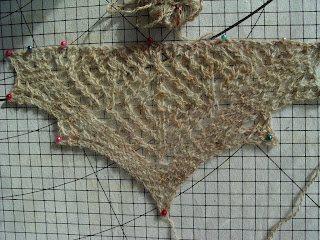 washed and set it. I then swatched the pattern to see how it would look.

I'm thrilled with the results. The silk stains the yarn nicely when drafted and plied to create shifts between a rose and gold hue to the natural Shetland. The shawl will be warm - not really a hob nobbing at the Christmas dance kind of piece but more of a casual piece. 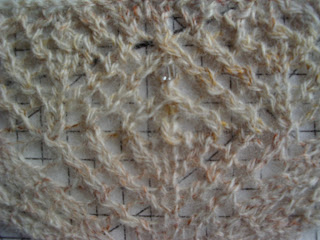 To further highlight the diamond theme, I'll be placing beads on the centres of the small diamonds. I wanted Swarovski crystals but the holes weren't big enough for the yarn. You can see on the swatch how the clear bead with the silver lining really pops where the amber coloured bead (below it) blends in too much.

I'm almost finished the second bobbin and then I can ply and start knitting. I'll have to boogie because that fair will come sooner than I think. I admit it, it's incredibly satisfying to have had a hand in creating the yarn as well as stitch definition but no worries - I'm not totally carried away.
I suppose to truly create a project from scratch one must first create the universe.
Posted by Michelle at 4:45 PM 3 comments: