McGuyvering
Last summer my husband had to pull over to the side of the road 500 miles from home in a rain storm to deal with a car part underneath the vehicle that was dragging loudly on the road. He crawled underneath, took the cord to his iPod player 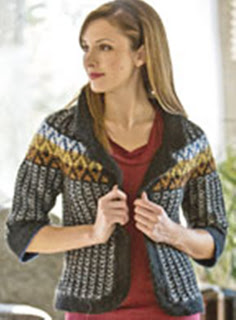 and tied the offensive part back in place. In our house we call that "McGuyvering it".

The urban dictionary defines McGuyvering as the ability to achieve a goal through the ingenious combination of common household items, in the spirit of Richard Dean Anderson's character McGuyver, from the television series of the same name. My husband was so proud of his fix that I think he's not gotten around to actually having it repaired 4 months later. Come to think of it - the art of making do with what we have is a skill worth cultivating, especially in these frugal times. 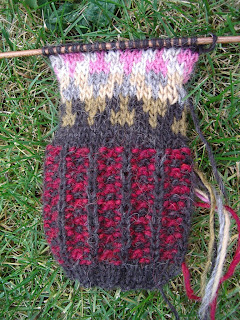 I'm thinking of "McGuyvering" a design from the new Interweave book Color Style. It's this lovely design by Veronik Avery. It's called the Mosaic Jacket and it calls for a combination of gray and black Lopi Light. Subtle shades of earth tones and blue make the yoke design. As I admired it, it occurred to me that I had enough Lopi Lite in stash. It was in kit form to make the Getaway Satchel from an older Interweave Knits. I have so many darn bags as it is and I'm no 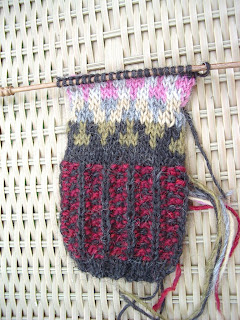 t particularly fond of felting (there, I said it out loud). The challenge was that instead of the neutral gray and black for the tweed pattern, I'd be dealing with red and black. How would that dictate the colours in the yoke pattern? I did some futzing around and this is what I came up with. I like it for the most part but I think I'll swap the tweedy pink at the top for a nice tweedy lilac I have instead. I do love red and purple. I did purchase a few odd balls of Lopi Lite to have the neutral shades for the yoke so I suppose that's "McGuyver Lite" but heck, I'm making do and that's what counts. I am quite fond of the way it looks actually. 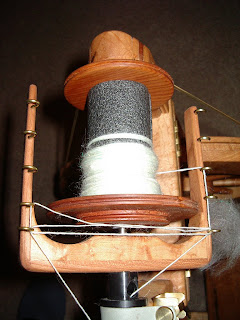 s to make lace weight yarn when the uptake is too strong. Here's the link to her post which explains it beautifully but basically it involves copper pipe foam insulation and a knife. Voila - I'm spinning nice thin yarn too on my Wee Robin - no special equipment required.

I suppose this is what my grandmother used to call "making do" but you gotta admit, there's a certain smugness to solving problems with accessible solutions. Now - how on earth are we going to listen to the iPod now that the audio cord is holding the car together?
Posted by Michelle at 7:06 PM 1 comment:

Roam wasn't Knit in a Day
I've been focusing on making as much progress as possible on Roam. For those keeping score, I'm using Lisa Souza's 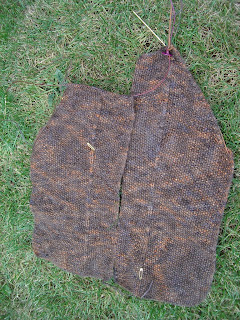 Baby Alpaca Silk in the Mohogany colourway. Sometimes I wonder if blog readers get bored seeing a fairly simple knit progress. After all, this is seed stitch with a simple slip stitch design running up the front. The yarn is perfect for this design since I really believe it needs to be very drapey and hug the body to show off the shaping. This yarn has subtle shots of cobalt blue through it so I'm thinking a nic 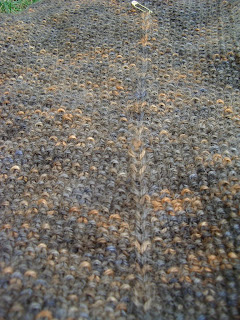 As you'll recall, I had to frog back the right front due to "gaugicus loosikus". The re knit went quickly and I've now completed the back and both front pieces. Everything matches and now it's time for the sleeves and hood. I've never done a hood before and I'll admit that it seems as though every designer is including hoods on their latest offerings. Riding to Avalon, Cassidy and The Basic Chic Hoodie are all on my "to do list" but by the time I get around to knitting them, I fear that the 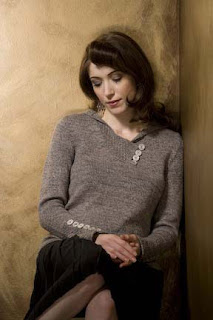 "Gangsta Chic" look will be passe. After all, these hoods will likely never be used (in my situation) so they're more fashion statement then functional. I do however really like the way they look on the designs.

I did purchase a little cardigan in the spring that included a hood that zips on under a small collar so when hoods are out - it still works. Maybe for some of these other designs that are less sporty than Roam a detachable hood is a possibility? If anyone's seen this done by another knitter - do share please! 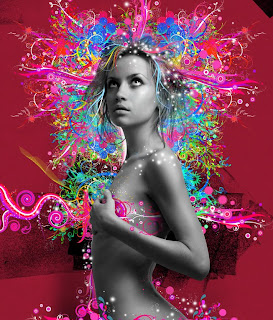 Who knows, maybe the whole hood thing will stay in fashion. After all, it masks a bad hair day.