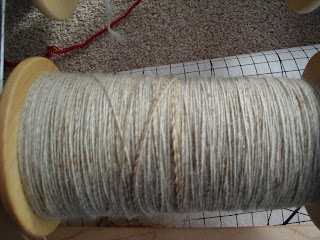 en spun some more. I made two whole bobbins of single ply thread to be plied as a two ply lace weight. I plied and plied and (you get the drift). This has been my main project for several months now. I'll be making the Diamond Fantasy Shawl for the Fair this September. I need 750 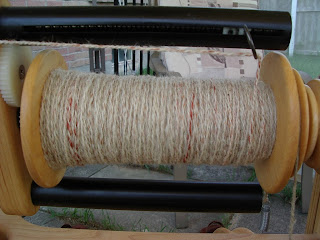 yards to make the shawl.

I washed, rinsed swung it by the tail round and round and left it to dry. I'm very pleased with the results - it's a pale wheat colour with stains of gold and Rosy copper. I wound it into two centre pull balls and then got out the old McMorran balance. 340m per 100g according to my calculations - between the two balls I apparently have 640 m. There are 1.09 metres per yard so a little kitchen math says...duh 699.91 yards. So close but cutting it too close I fear.
I'm eager to put some colourful roving on 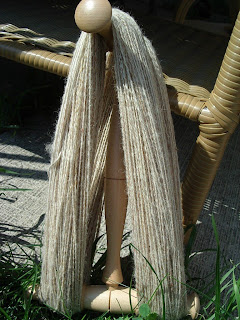 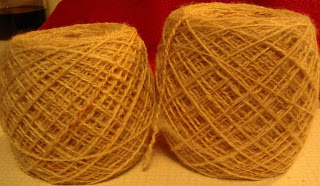 my wheel after so many days of "au natural" so I think I'll start with this and see how close I come to finishing then I'll truly know how much more to spin. On the up side - I did buy enough extra to spin more if I need it.


Speaking of natural hand spun - I'd like to highly recommend the 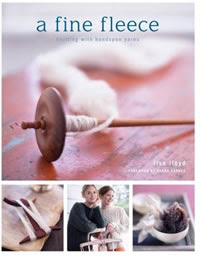 new book A Fine Fleece. It's a lovely publication of classic cabled and textured designs created to show case one's hand spun. Each design is also shown in a commercial yarn in the event you just want to cut to the chase. I adore this book and it has me pondering what sort of natural roving I would want to spin to make an entire sweater. I do love the Blue Faced Leicester so if anyone knows of a good source for 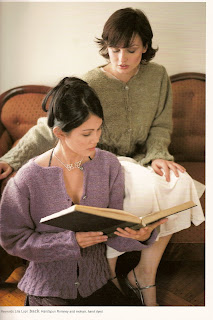 some pretty BFL - let me know. I love this cardigan.
It reminds me of the Elizabeth Bennett cardigan from Stephanie Japel's book Fitted Knits. 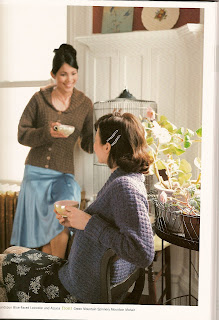 This woven patterned cardigan called Amanda is my current fav 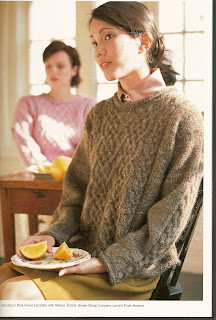 and finally this pullover called Two Hearts is a show stopper.

There's nothing like knitting with your own hand spun and although I've knitted a scarf from hand spun - I've yet to make a garment with my own stuff. The best part is that if you need more - you just dip into the roving bag and voila, problem solved. If there isn't enough roving then as long as you're close - there's always a nice vest.
Posted by Michelle at 7:18 PM 2 comments:

VIPs
Since this blog promotes itself as having a wine component for the cork dorks in the crowd - I thought I'd fill you in on last weekend's gala Niagara Wine Auction event. DH and I were invited by my boss to attend the 2 days of festivities, noshing, sloshing and rubbing elbows with some celebrity types. Since the auction was to benefit Sick Kids hospital in Toronto - the colour du jour was pink. 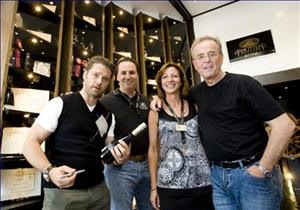 On Friday I was thisclose (ok about 10 feet away-that's not me in the picture) to Jason Priestly who (in addition to being a former teen heart throb) is one of the hosts of the TV show Hollywood and Vines. He was rarely without a TV camera shoved in his face so it has hard to get a good look at him.

In keeping with the colour theme, I wore this little

number I scored on ebay for a song a few years ago. We walked the red carpet and as I was waiting in line I felt a finger dip down the top of the back of my dress. The woman behind me whispered in my e 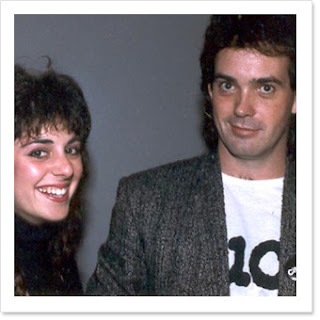 ar "You're going to hate me but your tag was sticking out." I turned and grinned and said "Not at all - thanks!" Then it hit me - Erica Ehm had just tucked my dress tag back into my dress! She was one of the founding VJs on Much Music when it launched in the eighties. Here's a shot of her along with a guy named JD Roberts. You may recognize him from CNN and other US news networks. He goes by John Roberts now but we Canadians remember when he was all cool and stuff. Erica Ehm is absolutely beautiful up close and looks 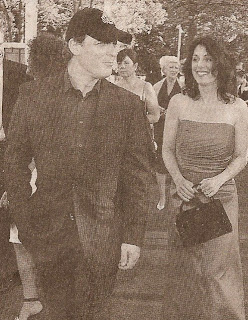 totally natural. Of course my husband was ticked off because I told him he couldn't wear his baseball hat with his suit. I guess when you're a celebrity you can get away with that stuff.


The event was hosted by Jan Arden who did a great job and musical guests were the Pointer Sisters and the Temptations. Hearing the parents of kids who'd been patients at the hospital for Sick Children was both heart breaking and uplifting.
As far as the wine goes - my memorable picks were the Pillitteri 2002 Cab Merlot during dinner and the Marynissen Sauvignon Blanc at the afternoon wine garden. Peller Ice Cuvee Rose is a gorgeous sparkling wine with a kiss of Cab Franc and ice wine. And...it's pink. The buzz in the industry is that the 2007 vintages are spectacular.
All of this talk of pink has me pondering my pink projects: 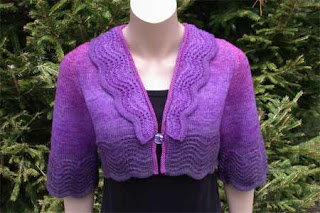 This is one I stashed last year that's been calling me lately. It uses about 20 gradient shades of rose fading into each other. It's by Strickwear. 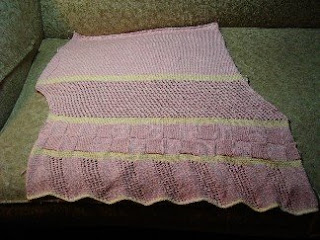 have to get to the back side of this skirt made from pink Koigu PPM from the cover of spring Vogue two years ago. 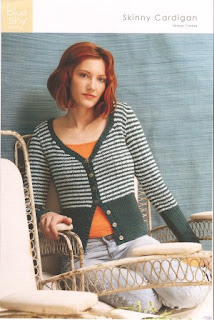 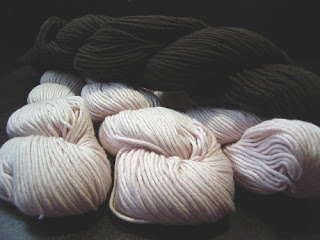 Alpaca Skinny Cardigan in brown and pink. She is young, beautiful and had her jeans tucked into a pair of knitted UGG boots in brown with this cardigan. It looked so great that I bought some brown to add to my pink from stash and decided I could make it in predominently pink with brown striping.

Now that Cinderella is back to mopping the floors instead of hob-nobbing with celebs there will hopefully be more quality knitting time. I found this picture of the Sundance Kid when I was looking through some old CDs. This shot is about 10 years old, the model is a muscular, hairy 17 year old now and the Fair Isle sweater is packed away for future grand kids but I love the attitude he's projecting. I guess when it comes to locating VIPs - there's really no place like home. 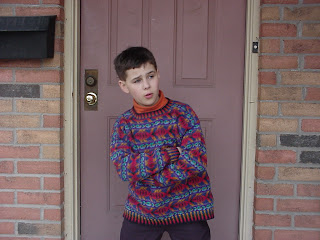 Planet Estrogen
I've been in a bit of a knitting funk the last month or so. I'm 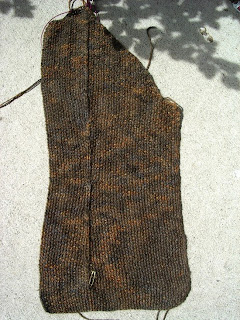 about half way through Roam and as much as I love the yarn and the pattern - my eye has been wandering. Roam is being made from Lisa Souza's alpaca and silk yarn in the Mahogany colourway. I had a chance to try on the original Roam last fall when I took a workshop from Laura Chau and the Big Sea Silk is lovely but looks a bit different from the picture in the pattern. I did want to replicate the shades as they appeared in the photo so the Lisa Souza appeard to do so. I've been alternating skeins every other row to mix in any variation from skein to skein. When you're dealing with hand dyed yarn - things can get quite funky. This yarn is so lovely and the seed stitch really tones down the variation in the yarn. I've begun the second front piece even though it's getting a bit sticky to be working with Alpaca! It was about 32 degrees Celsius today. 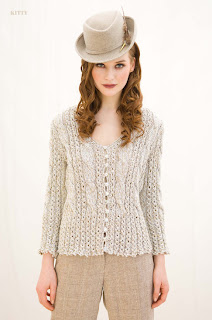 I had mentioned a few months ago that I was eagerly anticipating Louisa Harding's Summer Classics collection. In particular, I was eager to get my hands on this pattern. It's a lacy cabled cardigan called Kitty. It's made from one of her yarns called Cinnabar which is another one of those Frankenyarns that are so popular now. This stuff has: Viscose, Cotton, Acrylic, Silk 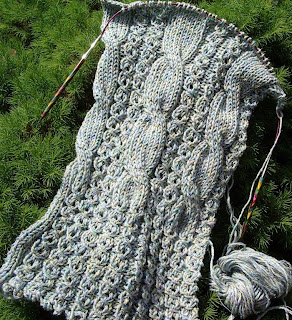 , Linen, Polamide and Acetate - whew! The sample in the book was done in a natural colour but I chose a lilac shade (#10) with flecks of wheat and gold. There's just a hint of a sparkle too. So subtle you almost think you're imagining it. I decided to cast on a few weeks ago and was delighted to discover that the pattern was easy to memorize and on 5mm needles - this 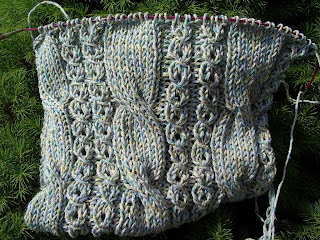 front piece is zipping along quite quickly. Kitty with its frilly, summery, girlie vibe is a nice complement to Roam's sportier tone and manner.
I've also zeroed in on a probable contender for Printed Silk Cardigan. I may be a wee bit late to 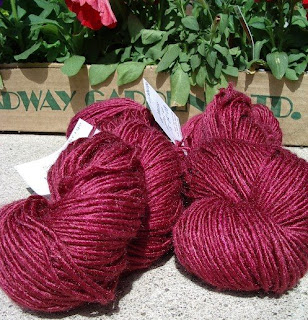 the party but I'm 0nly now discovering Malabrigo Silky Merino. It's a dk weight but on 3.75mm needles knits to a sport weight gauge which is perfect for the pattern. I swatched with a variegated shade called Indecita but this design begs a semi solid so the delicate twist pattern doesn't get lost. I nabbed a shade instead called Rupestre which is a luminous raspberry colour. I really see the shine in this one which I also think is important for this pattern. I was sorry to hear that there was a fire at the Malabrigo factory but I'm told it was only smoke damage. Jocelyn at Stitch has some of the Madras Perla set aside for me as well. Just doing my bit to provide support to the yarn company in their time of need.
So in the end it was a little frou frou that saved me from knitting boredom. Must be my estrogen kicking in...or all the promos for Sex in the City.
Posted by Michelle at 5:20 PM No comments: