Two Minutes for Holding
We take our hockey very seriously here in Canada. I 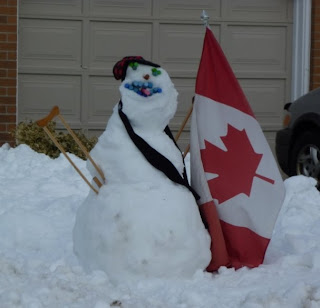 snapped this picture of a snowman created by some of the university students living down the street. He was built the day of the hockey game and quite frankly - I think it looks like the Michelin Man and Captain Jack Sparrow had a love child (notwithstanding the Canadian flag).
For knitters, the Olympics were definitely a reason to 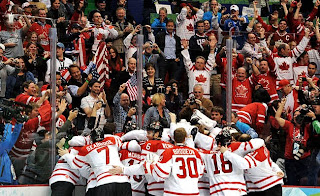 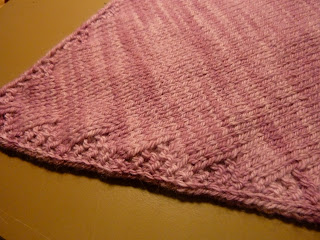 celebrate. I joined my knit night team (one talented team member designed a logo for our team) and decided to cast on for the Tanis Gray XOXO Raglan mauve cardigan. I did get one sleeve done which is an accomplishment for me. Madrona was great but being away and then catching up at work when I got back didn't lend itself to lots of knitting time.
Here's the first sleeve - the little garter triangles that decorate the raglan sleeve are a lovely detail. 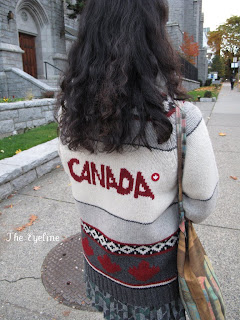 There was lots of lovely knitwear on display too. The Canadian team sported bulky cardigans which are inspired by the Cowichan Sweaters. I did see them at the Bay and liked them quite a bit. I don't recall them being the $300 people are quoting now - more like $125 or so. They are sold out but there are options (we're knitters after all).
There is this free pattern on the Ram Wools site which isn't too far off of the mark.
There is a Raveler who is charting the design too.
Check out the Olympic style "look book" to see some of the designs worn by other Olympic volunteers.
I'm almost tempted to design something myself for next year as well. I do love the rustic feel of the sweaters but something a bit more fashion forward might be in order. This design from the cover of Knit Scene has always appealed to me but I'd want to put a bit more of the graphic elements on it.
So in the end, the Olympics were a success. The country did itself proud, discovered its voice and my queue got longer.
Not bad for 17 days work.
Posted by Michelle at 6:48 PM No comments: