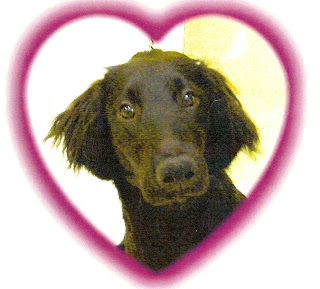 Actually, I heart both my baby wolves - the one you see to the right and the one that taunts me.
One sunny summer day when I was 8 years old, my family was riding in our 1972 Datsun station wagon in the country. A hound dog came bounding out from a bush by the side of the road where he had been waiting for a car to pass so he could chase it. As the dog ran along side of us barking, my father decided to play along and so he brought the car to a complete stop. The dog was so caught off guard by this (he almost bonked his head on the rear tire when he stopped so quickly) that he sat there puzzled for a few minutes pondering his options. "Now that I've caught this object of my affection - what the heck do I do? Do I bury it? Chew it? Lick it?" He eventually trotted away, ears and tail dropping in defeat.
I know exactly how that dog feels. 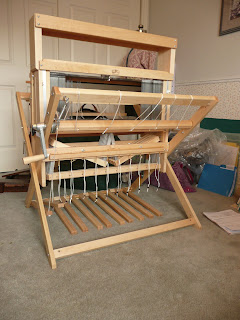 I'm pleased to announce that "the loom is in the house". After much consideration, I decided to purchase a loom. Resistance is futile. I'm enjoying the weaving lessons so much that I know I will want to weave - serious weaving. I know Schacht makes a great product and my Matchless wheel has been a perfect fit for me. The Baby Wolf Loom by Schacht had everything I wanted - power without being too mammoth. When I found one at Shuttleworks in Calgary that had all the elements I wanted (8 shafts with high castle), I decided to go for it. (Don't look now but they've created a walnut Baby Wolf for their 40th anniversary).

My husband picked it up at the trucking depot and brought it up to the "loom room" for me. After his part was done, he looked at me and said "Now what?"
The Schacht booklet that comes with the loom tells you how to assemble it but that's all. We got as far as we could on our own and then a generous guild member helped me put the rest of it together. I did get the Deborah Chandler book Learning to Weave and it's excellent. I did wind a warp at my weaving lessons but that whole lesson is a blur and the loom I'm using for lessons is quite different.
This much I know. Once the warping reel, raddle and video (maybe actually seeing it again 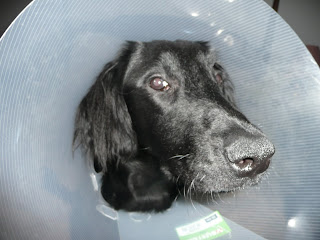 will help) arrive - I'll be venturing into uncharted territory. I shall prevail.

Maybe I'll just bury it in the backyard.