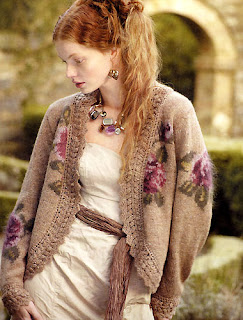 finished the first sleeve on Roam. I'll spare you the pictures...it's miles of seed stitch looking pretty much like the other pieces. I have however, had an epiphany (just cause I like saying "epiphany"). Apparently, my desire to knit something isn't so much a function of its beauty (while that helps) but rather it's a matter of scarcity. To be quite frank - nothing makes me want to knit something more than being told I can't.


Let me present exhibit A - Botticelli. I loved Rowan 44. LOVED it. I really loved Botticelli when I first saw it. It went on my "bucket list". Then Julie at Needle Emporium posted to her blog that she'd received a sample garment from Rowan. I had to see it in the flesh (or should I say "the fibre"). Once I tried it on, I was smitten. This is one beautiful garment and the colours are amazing. "I'll take one to go" I announced emphatically. "Not in that shade", explained Julie. Apparently, the shade Camel 157 of Felted Tweed is in short supply world wide. Of course, I could choose another background shade (and another knitter shopping at the same time I was did just that). It would look great in many other background shades - wheat is also an option. 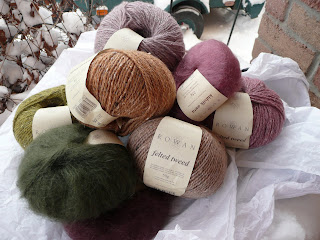 That was beside the point. I was now determined to get some Camel Felted Tweed. I bought the motif shades of felted tweed and Kid Silk Aurora from Julie and scoured the Internet for the shade I needed. I hit pay dirt at Cucumber Patch and it arrived yesterday. It's great and I think casting on for this project may just be the perfect way to begin the New Year.


After all, what's Christmas without the Camel? 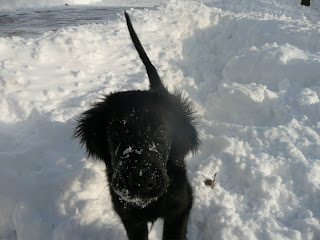 Happy New Year everyone - may you start the year with a joyful snout full of snow!
Posted by Michelle at 2:37 PM No comments:

Judy, Judy, Judy
I've secretly wanted a dress form (aka Dress Judy) for a couple of years now. I toyed with the notion of ordering a new one but recently some of the beautiful vintage dress forms have really caught my eye.
About a month ago, I was traveling home from a meeting at 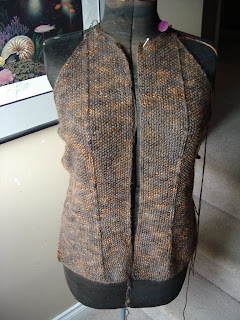 the winery through Niagara on the Lake. I drove past a funky antique store housed in an old church called Europa Antiques. Every time I pass by I think "I should go in". This time was no different except immediately after I thought "I should go in" and equally strong voice responded GO IN! When I relayed this story to one of the women who owned the store she turned deadpan to her partner and said "Guess what? Looks like that microphone we installed out front is working". How can you not buy something from folks with such a sense of humour? They had two dress forms and one of them was exactly the size I wanted. It's an Acme dress form from Brooklyn. I love imagining all of the talented seamstresses who may have worked with her. For now, she displays my stranded sweaters and this week shows of the pieces of my Roam. This lighting actually shows the shading of the yarn quite accurately. I'm just finishing the first sleeve and have one last sleeve and the hood and finishing to go. I'll freely admit that I'm on sleeve island at this point. I do love the rhythm of the seed stitch and the yarn is amazing but it feels like the 78th km of a 100km race. So far come - so far still to go. I do really want this puppy done so I'll continue to plug away!
Speaking of puppies - Phoebe is doing well. She's growing like a weed and is showing impeccable 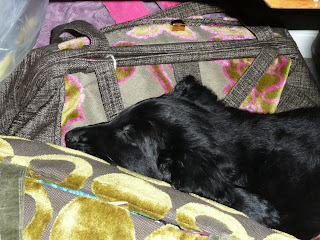 taste in her choice of pillows. What else are designer knitting bags for?
Posted by Michelle at 5:57 PM 1 comment: 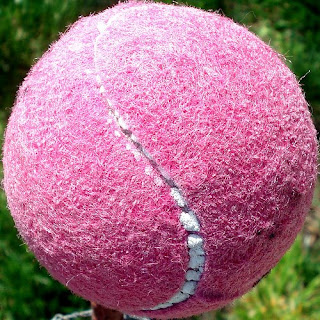 Not much knitting going on in these parts. There's a distraction in town. 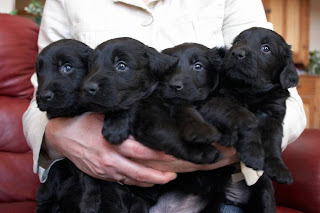 should get another. After much discussion...we decided to get a puppy. We found a great breeder and as luck would have it, there were 5 girl puppies from a litter of six so we would have no problem getting another female. 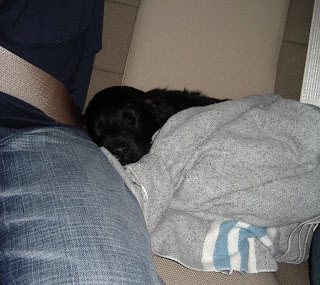 A week ago Sunday, we picked her up. The glow of puppy kisses and tail wagging lasted half way down the breeder's driveway when she began wailing. After about 45 minutes - she fell asleep in the back seat between the boys.

We've named her Phoebe because I always said if Echo had been a human being, she'd have been Phoebe on Friends. She's adorable and ALOT of work right now. The wailing is still continuing in the night time but a round of NyQuil shooters and ear plugs seems to help. 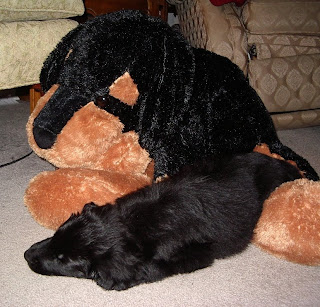 On the breeder's advice - I bought an over sized stuffed dog to mimic her mother. She loves to cuddle up to it. I got a black dog so she would feel comfortable but it doesn't make for the best photography when the subject is also black.

And yes -she's already fetched a bag of Lopi she found in the corner.