Seriously
Where the hell am I going to find room for a loom? 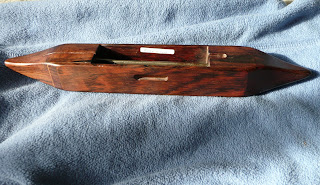 r those just joining us - I've been holding up the crucifix and garlic for several years now when it comes to the thought of weaving. I've been spinning for two years now and while spinning does require equipment - it's still somewhat portable which is why I like knitting.

Last September, I won a prize at the Five Counties Guild competition. It was a weaving shuttle. A beautiful rosewood hand carved shuttle by a wood worker in the Kitchener-Waterloo area named David Bell. Now I'm a sucker for beautiful wood so I started to think about weaving. As a member of the local weavers and spinners guild, I had access to alot of "bench strength" (all puns intended).

I signed up for an intro lesson last Monday. My teacher is a retired high school teacher so I'm in good hands. She let me wind some bobbins and then using her Gilmore loom I made 3 samplers just to see what it was like. My teacher had warped the loom already so it was easy. Here are some shots of my weaving attempts. You can see on the first section how my ends weren't very tight so it flares out a bit. Of course, now I'm hooked and beginning to ponder which loom would be best for me. I usually get tools that grow with me from the get-go. Since I've no extra space in this house, a loom that folds is a must. I'm thinking about 26" is the way to go. If I do anything wider, the guild looms are available.
I've been scoping out the Schacht Baby Wolf and the Louet Jane. I'm not familiar with the terminology enough to read the specs and understand them. If anyone has any bias one way or the other - I'm all ears. 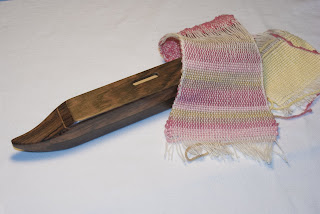 gave him for Christmas.

Here are some great night shots he took down by Niagara Falls. I love the one that shows the colours lights on the horseshoe falls. 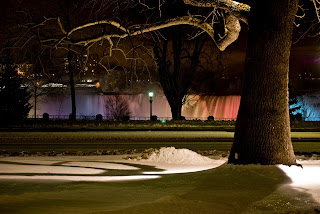 Lastly - here's a shot of Phoebe. Yes, Flatcoats are a goofy breed - that's why they fit in well 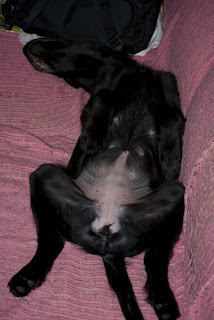 with our family.
Posted by Michelle at 6:43 PM 3 comments:

New Vintages
Robin Williams once said of Canada's relationship to the US - "It's like living in a loft apartment over a really great party". Make that a cold apartment. As my yoga instructor announced last night, "I've got February head in mid January already". I'm on the last sleeve of Roam and I feel like I'm roaming through an endless desert with all of that seed stitch. I'm also working on my first store sample in some delicious Americo Alpaca. It seems like ages since I experience a warm day or the delight of a new pretty spring project.
It's this stage in winter's course that a few things help me to hang on. Seeing the launch of the new spring knitting magazines is one of them. I know when the new Rowan comes that Madrona is just weeks away and then March is around the corner 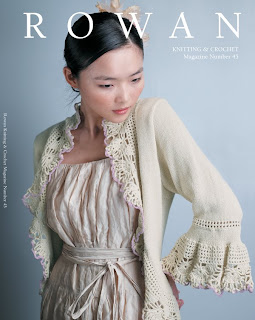 and I consider that the home stretch. I don't have the new Rowan magazine in my hands but heck, I'll throw caution to the wind and highlight some of the designs that have caught my eye early on from Rowan and Berroco.

I'm loving this cover cardigan called "Lotus". The model is stunning and I'm a sucker for this elegant shade of wheat. The crochet edging appeals to my need to shake things up a bit and I think it would be beautiful over dresses, summer tanks and a variety of outfits. Consider this queued. 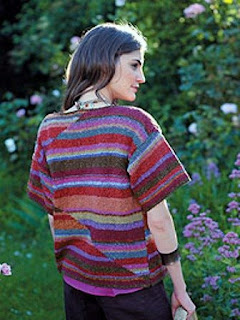 Also in Rowan - I'm intrigued with the Kaffe Fassett Summer Tweed sweater. It's vintage Kaffe and the way the triangles intersect really makes it interesting. I bet this would go with lots of colours and outfits too. 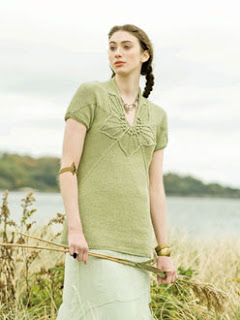 Norah Gaughan appears to have delivered another great collection in her NG Volume 4 pattern book. This cover tunic called "Flower Child" is stunning.

The way the panels intersect on the back (are we seeing a theme in what I'm attracted to here?) is also beautiful and I think it would be a fun knit.

s been a while since I spoke about a wine in this blog. I need to get back to that because I've been attending lots of classes and tastings to learn about the new vintages. Normally I pair a lighter rose or riesling with the new Spring pattern books but the new Trius Red deserves special notice. The 2007 vintage has just been released and since the summer of '07 was a winemaker's dream - the Ontario 2007 vintages will be the best EVER released. This Trius red is fruit forward with the perfect touch of oak. I love I it when I can't pick out the individual elements in a wine because the blend is so perfect and this one hits the mark. When I drink it I remember the summer of 2007
....and dream of pretty sweaters.