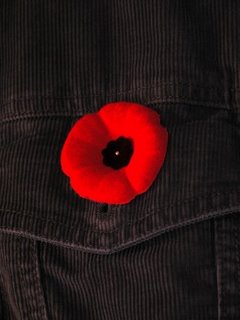 IN FLANDERS FIELDS the poppies blow Between the crosses row on row, That mark our place; and in the sky The larks, still bravely singing, fly Scarce heard amid the guns below. ...

We wear poppies on our jackets every November to remember those soldiers we've lost in war time. Poppies have come to symbolize our fallen war heroes because of this poem written by a Canadian doctor who served in World War I. John McCrae died at age 45 due to lung damage caused by serving so close to the front lines. He's from Guelph Ontario and I read in the newspaper this weekend that in 1969 his boyhood home was to be demolished to build an apartment building. His neighbours mortgaged their houses to raise the money to buy the house and preserve it. It was eventually purchased by the province and made into a historical site but I think it's so cool that regular people would put themselves on the line to protect this bit of history. I guess there are all kinds of heroes - even in every day life.

It occurred to me this weekend that it was a bit of Kismet that I was working on a sweater design named "Poppy". It's proving to be a great project. Easy/breezy with wonderful colour, amazing yarn and a bit of design challenge. In my last post I waxed poetic about the Fibonacci sequence. I loved the way it looked on Wendy's version of Poppy but I must admit that when it came down to it - my inner artist rebelled. You see, I had certain pre-conceived notions about where I wanted the vertical lines on the bottom piece to fall. I envisioned one just on the side and another distinct line right down the middle. Lisa's version on the cover of Yarnplay has one dead centre and I love the way it accentuates the v-neck. In the end, I simply decided to wing it and add the design elements when my inner voice urged me to. I'm enjoying it more than having to count the rows. Go figure - I've learned something about myself. 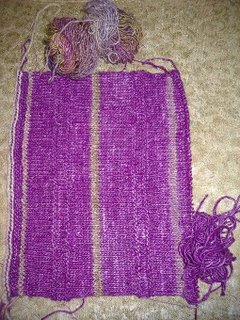 Here is my bottom piece of Poppy thus far. It's hard to see the purl ridges between the stockinette Silk Garden but they add a nice slight contrast. I've chosen to do a provisional cast-on with waste yarn and start at the side instead of the back. When I'm finished, I'll do a 3 needle bind off. This represents about 1/4 of the bottom finished. The Cash Iroha is nice to work with. It's single ply with some sections having very little twist. The colour glows however and I feel energized just working with it. I'm quite pleased that I chose this combo.

I'm still plugging away at the pink Vogue Koigu Skirt and I'm almost finished the first piece. This may end up being side-lined a bit since It's more of a Spring garment. I'll post a picture of the skirt once the piece is complete.

Until then, I'm enjoying Poppy. I highly recommend this design. It'll teach you a thing or two...about yourself!
Posted by Michelle at 5:52 PM

Love your Poppy! I am doing mine in the exact same color. Don't ya just love it? I started with the sleeves because I was so excited about seeing the Silk Garden stripes.
How many rows wide are the stripes in your bottom part? Hard to tell by the pics. I am considering a few wider stripes in the mix. Can't wait to see yours.
ahrishal@epix.net

Your poppy is lovely!! Can I ask why you decided on the 3 needle bind off?? Wish there was a KAL...
mrsmunch2000 at yahoo.co.uk