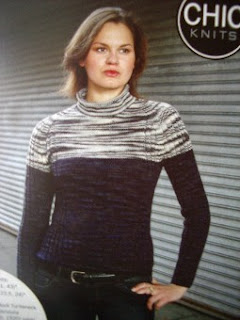 At the end of January, I surveyed my editorial calendars for the publications I write for and breathed a sigh of relief. Nothing due until the end of February! Oh how I would wile away the winter evenings knitting and spinning. Poppy would be done by Valentines! Out of nowhere came 2 other assignments both with tight deadlines. You see I write so I can buy yarn which I don't have time to knit with...because I write. As I take "mini breaks" from my work, I surf the net and sometimes stumble over really cool projects that jump out at me. Such was the case with Bonne Marie Burns' new take on her popular Ribby Cardi. She's re-designed the ribby-cardi as a pullover and the cool twist is she's used an interesting combination of hand painted variegated yarns. I found this electric blue with black mixture "very eighties" and I really loved how it blended with the black and white hand paint. Chic Knits has partnered with Scout's Swag to sell these patterns and provide the yarn for them too. I'd recently purchased some of the Pippikneesocks roving from Scout and her responsiveness and customer service were excellent. (More on the roving later on but it totally rocks)! I originally ordered the exactly same colour 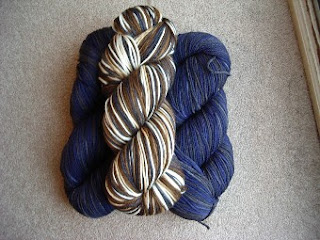 combination as shown in the model but when I saw Scout's "hot fudge sundae" colourway I immediately switched the colour for the top portion and subbed it instead. Hot fudge combines wonderful shades of caramel, gold, cream, chocolate brown and blue to tie in with the main colourway for the bottom part of the sweater. This yarn is so soft - it'll be a delight to work with and as usual, Scout's service was perfecto! One thing I admire about Bonne Marie's patterns is how wonderful they look on so many different people in so many different yarns. I'm looking forward to finally working with one of her designs. I'm not sure yet if it will be Ribby Pullie or Ariann on the needles next. I have to finish Poppy first.

Here is Poppy with one completed sleeve. I did one less increase on the sleeve and made the 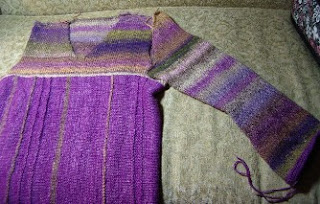 increases every 7 rows instead of every 9. This gives me a final length of about 21". I plan to assemble the shoulders and sew in the first sleeve before I proceed to make the second one. I'll need to make sure that it's just the length I want.

I probably shouldn't feel guilty about relieving my stress by purchasing yarn. After all, I could be pulling a Brit and giving myself a whole new hair style. Yeah, that's the ticket. Now I'll need to buy yarn for new hats! 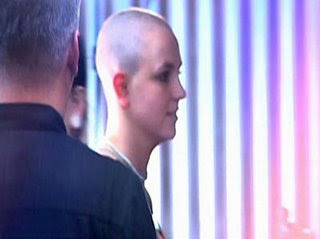 Your Poppy is beautiful. I love the colorway. I was eyeing the design before but after seeing how yours is coming out I will put it on my knitlist. And I agree about Bonne Marie Burns`s patterns. I bought Ariann a while ago and plan to make it as soon as I finish my second Wicked.