I didn't even know Blue Face Leicester existed as a breed of fibre until this past year. I encountered it first as a spinner using Lisa Souza's lovely roving. I learned that the fibres are long and luscious and that I needed to allow more twist to enter the wool before winding it on 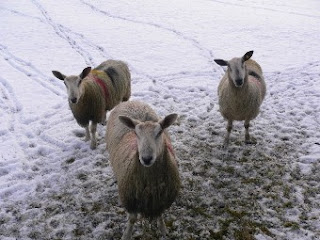 the bobbin. Otherwise, it would shred because it was under spun. Since I like to have a rapport with the breeds I knit and spin with - I decided to see what they looked like. Pretty cute.

The references I found on the Internet called it the "poor man's cashmere". Extremely soft yet resistant to pilling and able to show off the stitch definition beautifully. I had been so pleased with my BFL hand spun that when I saw the Fleece Artist BFL in aran weight at Red Bird Knits, I suspected that 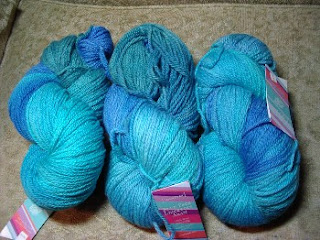 I'd found the perfect yarn to make Ariann. Fleece Artist is to yarn what Godiva is to chocolate. Their colourways are breathtaking and range from bright to subtle. I rarely work with yarn that hasn't got some colour variation (unless I'm knitting Fair isle or Intarsia) because I really love how a yarn with a bit of variation (such as a tweed) dances with the cables or lacework to shift everything around. When it works, it really works. I had swatched in Berrocco Ultra Alpace and Lisa Souza merino angora but neither seemed to be the perfect yarn for Ariann. I decided to give the Fleece Artist BFL a try since it was the perfect gauge. As for colour...I chose blue of course and bought 3 skeins in the colourway Lagoon.

I worried a bit when I received the yarn that the colour changes would be a bit too dramatic to not overshadow the lace work in this pattern. I swatched and liked what I saw but the final proof would be in the larger sweater. I must say that I am absolutely in love with both this design and the yarn. The yarn is soft like butter with the perfect amount of spring. When I had a few inches on the needles I was able to see that the design and the shading of the yarn complemented each other perfectly. One did not over-shadow the other. In fact, it looks a bit like gentle waves lapping on to the beach of the lagoon- no? 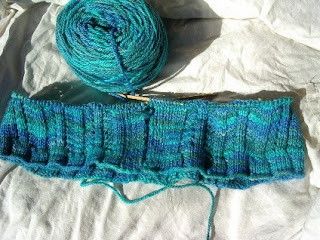 This is turning into one of those projects that just has it all going on. I'm lovin big ole blue and given that this yarn has amazing yardage and comes in colours that are to die for, I think I may just have to go back for more. Not for a while though...summer knitting is up next.

I am quite excited because I finally decided on a second smaller wheel for travel. I love my Schacht, especially with the Woolee Winder but it is a brute to take to guild meetings etc. My friend has a Louet Victoria and she recently took it to Florida where she spun by the pool all week. I 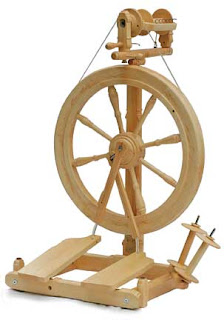 spun on it in December and loved it but wanted something a tad bigger. Enter the Kromski Sonata. I've ordered it from Wild Rose Fibres in Alberta and according to Colleen who owns the operation, the wheel shipped this past Monday. This is the second shipment (the first sold out in December very quickly). I had expressed an interest in one of the limited edition walnut stained wheels and lucked out when I got one!! I guess they decided to do a few more. I've ordered the bag as well. I had hoped that it would arrive by yesterday since Tuesday will be our next delivery but alas - my wheel is probably sitting in some Canada Post warehouse as we speak. Next post, I'll hopefully have some pictures of the new baby and a review of the wheel. I'm also hoping that Nathan Lee creates a Woolee Winder soon for the Sonata. Do you think he accepts bribes?
Posted by Michelle at 4:59 PM

Your new wheel sounds perfect and the Fleece Artist yarn for your Ariann is fantastic! Have a great weekend.

That yarn is perfect and beautiful (I expect to see it when you visit next). And as I was treadling on the Victoria at Lettuce Knit I was wondering what you decided on--it looks very nice.

I agree the Victoria is tiny. But very cute.