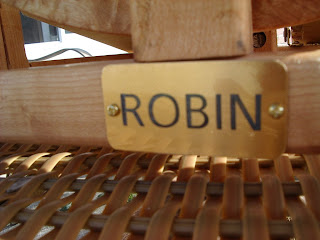 years ago, I mentioned to a group of friend that I wanted it to be beautiful, double treadle and portable. My friend Vanessa e mailed me back and said "I have two words for you...Wee Robin". 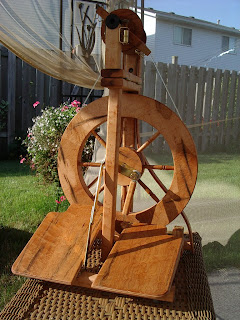 Wee Robin wheels are the creation of Gilbert Gonsalves. He downsized his Robin wheels (named after his wife) to a small version that folds up small enough to fit in the overhead bin of an airplane. As I was attending Rheinbeck that year, I was able to test drive one and immediately got on the waiting list. I eventually got my Schacht DT Matchless and my Kromski Sonata which I classify as "stay put and portable" respectively. I almost forgot that I was on the Wee Robin waiting list until about a month ago Gilbert called me to say that he had one for me and would be in my neck of the woods at the Finger Lakes Fiber festival in late September. 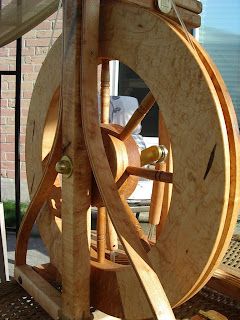 I had a lovely drive through the Finger Lakes region of New York state and arrived at the festival without incident. Going home was another matter...(note to self - make sure husband hasn't set the GPS to avoid toll roads when in unfamiliar territory). I had two Wee Robins to choose from. One had delicate birds eye maple and one had birds eye maple and what's called spalting which creates this tiger-stripe effect. I initially didn't care for the spalting but within about fifteen minutes, came to really love the effect. It was a hard choice but the tiger wheel came home with me. 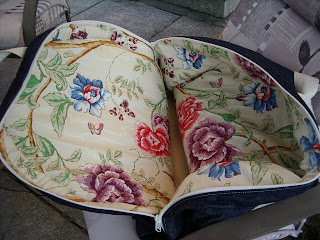 I also got a denim bag (made by the Bag Lady) which holds my Wee Robin beautifully. It clocks in around 10 lbs which is light enough to carry as a back pack (which the bag is designed to do) but sturdy enough to make the spinning experience nice and solid. The lining of the bag is beautiful too. 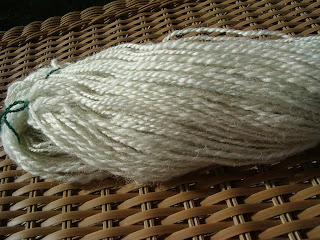 I spent all last week getting acquainted with my wheel. I spun and plied some Shetland roving I had from my BC trip. I've not measured the wraps per inch yet but I'm guessing it's around a sport weight. I'm very pleased with the consistency.

Wheel specs from the Robin site are:
The orfice is 22" high, when ready to spin. When folded the wheel isonly 17" high, 15.5" wide and 8" deep. The wheel, using cherry, weighs alittle over 8lbs. and comes with 3 bobbins that hold 6oz. of fiber each.The time required between fold up and ready is about 30 seconds. Standard ratios: 4,5,6-1/4 and 7-3/4 to 1. Ratios available to 15.5 to 1.
The Wee Robin tiger is truly a piece of functional art. I suppose all spinning wheels are but this one is special. It's a nano second to set up and I find the pull (a criticism of the bobbin lead tension) to be just perfect to my taste.
I truly feel that this one fills a gap in my wheel repertoire - in other words "Robin, you complete me".
Posted by Michelle at 6:32 PM

Gorgeous. You are a lucky lady.

i can't wait to get my wee robin!

It is beautiful. Maybe I'll try one out at Rhinebeck. Not that I'm going to spin or anything.

what a beauty! I wish that I could try one out too :-)
Does he sell them direct, or through a dealer?