I recently heard Stephanie Pearl-McPhee (aka the Yarn Harlot) interviewed about the success of her fundraising efforts for Doctors without Borders. At last count, the total was $320,000. She surmised that "Knitters think differently. They truly understand the power of cumulative effect." I've been thinking a lot about this comment over the last few days. She's right. None of us calculates the total number of stitches to be processed to complete our heart's desire. We simply cast on and keep at it. If we screw up, we frog, move on or eat chocolate but for the most part, we forge on until the job is done. It's a skill that informs many parts of our lives - as parents, friends and business people.

In what way do you believe knitters think differently?

As I try to celebrate the power of the "cumulative effect" with Poppy - I'm in awe of Noro's ability to create these amazing colour changes. Here she is with her back now complete. 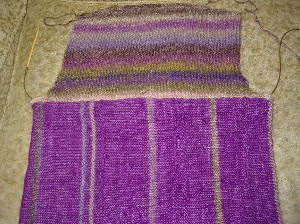 I decided to finish the back to get the measurement across so I could plan my sleeve length. The pattern calls for a 25" sleeve and some of the finished Poppies I've seen look a bit too long for my taste. I've measured wrist to wrist and will probably excuse one row between each of the increases..maybe two. I'll do the math when I have more than two hours of sleep per night under my belt.

I'm also having a blast working on the Lake Park hat with my handspun. I often find that my finished knitted objects are filled with memories that are evoked after they're done. I wear them and reflect on where I bought the yarn, what movies I watched or what life event was transpiring while I was working on the project. Knitting with your own handspun has the same effect except the yarn has built in memories already. 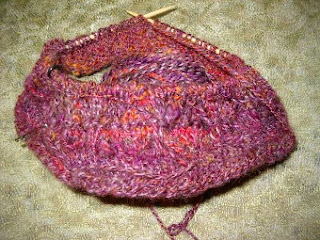 Store bought yarn is a blank canvass when it comes into your stash. As I knit this hat, I think about how this roving was the first roving I ever bought or spun with. I think about what a great time I had with Hope, Lolly, Anmiryam, Nicole and Adrianne at Stitches East when I bought it. I think of those first clumsy spinning lessons as my very patient teachers coached from behind a glass of wine. I will definitely be knitting more of my handspun. It's very Zen.

I treated myself to a new knitting bag. It's the Lexie Barnes Lady B bag in one of their new colourways "Baja". 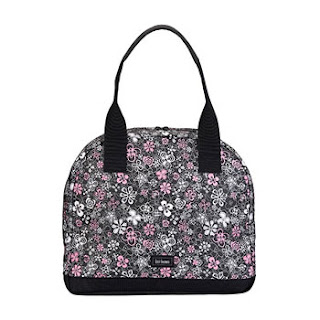 I bought it because of the pink and black but once I had it for a few days - I noticed that the flowers were actually hiding little faces. This type of little surprise delights the heck out of me. Seriously...I need to knit myself a life. 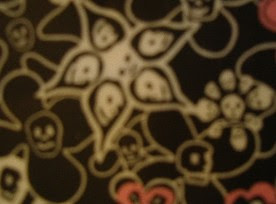 I zipped up to the Needle Emporium last Friday to visit Julie. In addition to cashing in my Christmas gift certificate on some Blue Sky Silk Alpaca (later about that), I got a gander at the preview for the new Rowan Spring books. Rowan has dispensed with the awkward posters and put together a catalogue with images from their entire Spring offering. Rowan 41 is right up my alley (reader caution here...my alley tends to wander into places like Oz and Wonderland). I recall a lacy long-sleeved sweater in Kid Silk Haze that tied under the bust with a beautiful bow. A romantic cardigan in their new yarn Damask with flowers around the neckline in Damask and Kid Silk Haze. They're offering a Bamboo yarn supported by a separate book that has a real "Memoirs of a Geisha" vibe to it. RYC has a yarn called Cotton Jeans that has some classic beautiful cabled patterns. The books will hopefully be here soon. I'm just waiting for the call from Julie that the eagle has landed to make the pilgrimage.

There's no doubt that the new Spring line will see me stashing up for a project or two. It's a damn good thing I appreciate the cumulative effect and don't focus on the whole job at hand...the alternative would result in a yarn diet. Perish the thought!
Posted by Michelle at 4:51 PM

i think knitters are more generous with sharing knowledge.

First the gushing: your Poppy looks fantastic! And I love my Lexie Barnes bag, you will love yours. The print is fantastic (now I want another one--maybe a tote bag).

Now how we're different: we notice the details--how much entertainment one ball of yarn can give, how someone finished the inside of a sweater, the differences in how things feel in your hands. We know details matter.

I think that knitters share a trait with anyone who "builds" things with their hands. We are conscious of the time spent, the process of creation, the details. The value of the thought and effort that goes into the item, rather than the "value" of the item itself. I can buy someone a pair of socks for $5 and when the socks wear out the recipient will toss them without a second thought. OR, I can take a month to build someone a pair of socks and wrap their feet in love. That's worth more than $5.