She who dies with the most toys wins

I love the toys 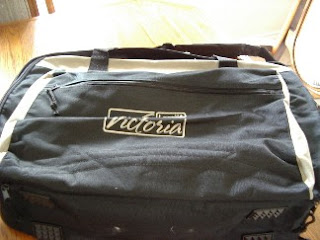 that go along with my fibre addiction. Spinning has been especially great because it naturally lends itself to lots of cool extras. As I mentioned in a previous post, the new Louet Victoria spinning wheel caught my eye when it was unveiled in advertising last fall. Clocking in at just over 6 lbs and folding up into a back pack - it's the perfect wheel to grab and go. Lettuce Knit sold their one wheel right out of the box and I didn't have a chance to try it. Apparently, the January shipments are all sold out as well. Then, a miracle happened. A co-worker of mine who spins had mentioned the Victoria to her husband at the end of November. She just mentioned it in passing but this charming fellow hunted it down for her as a Christmas gift. He mentioned to me at the company Christmas party that he'd bought it for her and she was kind enough to invite me over New Year's eve day to give the Victoria a try. This is what the bag looks like. It can be carried like a soft briefcase or as a back pack. It is incredibly light and everything tucks inside nicely. 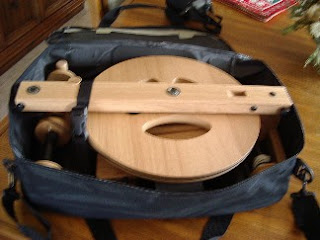 In spite of its light weight, the Victoria feels quite sturdy. My co-worker's wheel is made from Oak and it's very pretty. 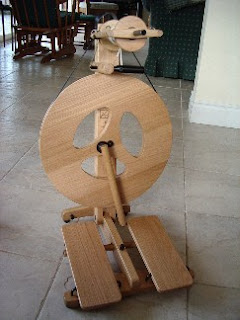 Here is how it looks set up and ready to spin. It's about a 30 second process to get this wheel ready to go - truly portable. I was able to spin on the wheel for about an hour or so. It's Scotch Tension and the treadling is very smooth. I enjoyed it very much and Louet appears to have struck a great balance between portability and engineering. It's very quiet too.

To give you a sense of scale, here's Victoria lined up with my Schacht and my friend's other wheel - a Majacraft Suzie. 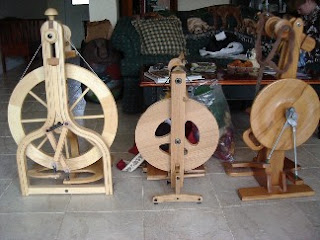 As you can see, it is quite the petite lady compared to the other wheels. I have my name on the March waiting list but I'll have to check in and see how my Wee Robin is doing first. I see the Victoria as a great option for the various demonstrations that my guild is fond of participating in so, I may be a three wheel spinner!


When I was last at Gemini Fibres, I purchased a McMorran balance (official spinning tool of Greys Anatomy). As I start to produce "knittable" yarn, the next big question is "How the heck much do I have?" This gizmo takes a length of yarn looped over the end of the balance which you snip a bit at a time until the balance is horizontal. The length is measured (in cm for me) and then divided by 10. That number equals the metres per 100g of yarn you have. 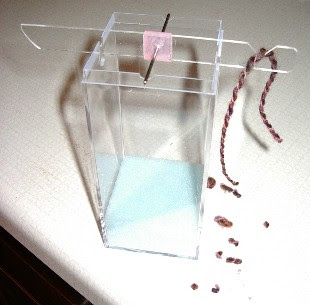 I needed a scale (which my husband produced since he has to weigh the hardware that goes in his RC planes) and I found I had 111g of some handspun from a few months ago. My strand once balanced (you can see where I snipped the ends off to get the right length to balance) measured 17cm so my calculations indicated 1.7m per 100g of yarn or around 188m total for my 111g.

Here's a shot of the handspun that I'm getting ready to knit. I'm planning to make the beautiful hat that Marnie from Marnie Talks has designed and very generously posted to her blog. She's indicated 40g should work so I'm confident that I'll have enough. She's just posted a pattern for matching fingerless gloves....hmmm, think I'll have enough? 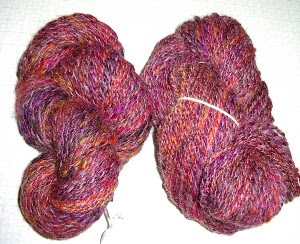 I did get my Woolee Winder for Christmas so, as soon as I finish my current bobbin - on it goes. I can't wait to try it.


I guess we knitters and spinners are a tacticle bunch with the minds of engineers and hearts of artists. I'm amazed at each new development (and the discovery of old ones that are "new to me").

I'm still a discriminating junkie though - I've no desire to acquire the Knit-light needles.
Posted by Michelle at 7:29 PM

You can never have enough toys-remember that. It's almost like shoes!!!

That post makes me want to spin. And that Victoria wheel is so cute.