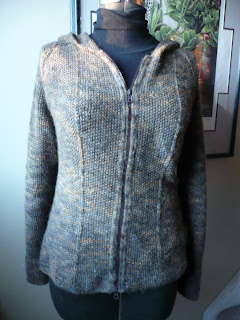 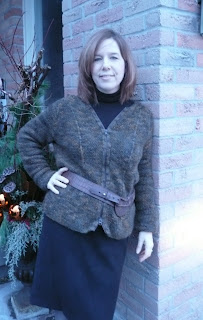 I wanted to knit it. All of that seed stitch can make you mad. I did learn how to produce this stitch continental which was a god-send. However, with this sweater, I made a tragic, rookie mistake.
I used an alpaca and silk blend.
I made a size larger (made size 40") than I normally would.
Those two decisions have produced a garment that's bigger than I'd wanted. Note to self...alpaca = size "DOWN" not up. Instead of the sleek, sexy zippered hoodie described in the pattern, I have a longer, roomier sweater. It still fits fine - it's just different than I'd planned. These shots on the dress Judy show the stitch and the yarn fairly accurately. I used Lisa Souza's Baby Alpaca Silk in the shade mahogany. It was delicious to work with but I will use it for shawls in the future or I will knit a size smaller than I want the finished garment 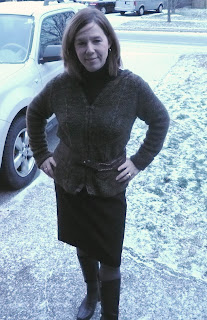 to be.
Thrown over a skirt, tights and boots with a turtle neck - a leather low-slung belt kind of makes it look ok. It's very toasty and I must admit, I've worn it a lot already.
Next up is hopefully a finished Cobblestone pullover for my husband for Christmas. I'm in good shape so far and that will make TWO FOs in one month. Outrageous!!

With all of this finishing, pretty soon I'll have to decide what new project to cast on for. The possibilities are mind-boggling.
Posted by Michelle at 5:34 PM